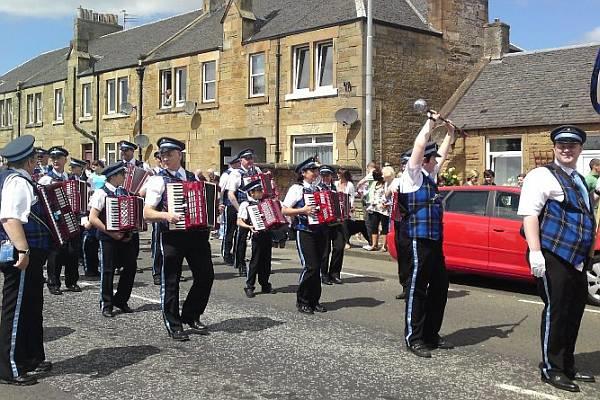 From the Q and A section of the band's website. Says it all, a band guaranteed to put a smile on your face.

When was the band formed and by whom?
The band was formed in July 2008 by local primary school teacher Alan Potters. Although still under Alan’s leadership, the band is now run by a committee of 5 members who each have a specific role to perform in ensuring that everything runs smoothly.

What age groups attend your band?
The age range is currently between 3 and 70+. Membership is open to anyone from the age of 8 for accordion playing, 10 for drumming and 3 for percussion.

How many members are in the band?
As at October 2012 there are around 46 members.

When and where is band practice held?
Band practice is held each Monday evening in Bo’ness Public Primary School. An alternative venue, also in Bo’ness, is used during school holidays.