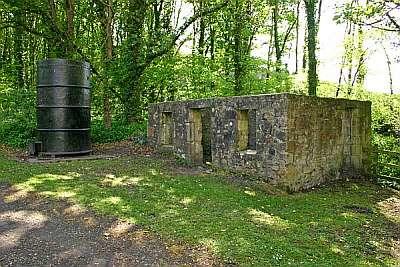 Small outbuilding, to the rear of Kinneil House, where inventor James Watt worked on his development of the steam engine. The experiments were supported by industrialist John Roebuck, who was living in Kinneil House at the time. The building, which now has no roof or door, dates back to the mid 1700s.

All local children learn that James Watt 'invented' the Steam Engine in Bo'ness at Kinneil. Of course, he actually improved the Steam Engine by adding a separate Condenser. This device allowed steam to escape and be condensed to water without cooling the main cylinder. Efficiency of early engines improved around 3 fold. This meant that Steam became a practical tool for industry. No longer would mills be tied to rivers for power. Instead, weaving mills, flour mills and more could be situated near coalfields or near other sources of materials.

The Industrial Revolution was born.

Bo'ness may not be where James had the idea (it was Glasgow Green); it may not be where the engines were finally perfected and built (Birmingham with Mathew Bolton) but Bo'ness can lay claim to being...

The Crucible of the Industrial Revolution