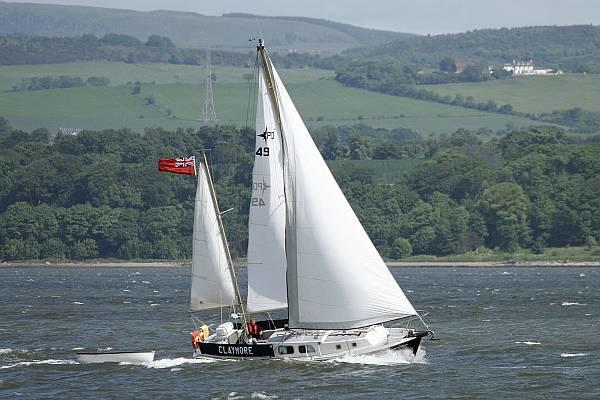 The Upper Forth Boat Club was formed on the 3rd Feb 1952 and had its origins in three Bo'ness clubs, the Bridgeness Yacht Club, the Upper Forth Sailing Club and the Bo'ness Motor Cruising Club. An elegant silver cup presented to Bridgeness Yacht Club by J P Smith Esq. in 1907 and on display in the Kinneil Museum is the earliest known record of these.

Inscriptions on the silverware chart the progress of the Upper Forth Sailing Club and its successor the UFBC. The oldest UFSC trophy is a cup presented by Thomas Blackadder Esq., the Vice Commodore in 1925. With the exception of the war years, this cup and other trophies, one in the form a gondola presented by J M Hogg in 1930 and another, a motor cruiser dating from 1931 were competed for regularly until the 1960's. Financial records document a thriving social scene.

During the season boats are kept on drying moorings on soft mud at Grangepans, members laying their own moorings using the club raft. These are accessible from shore 3 hours either side of high water.

The majority of the membership live locally. In the past members worked in the shipyards and mines. Nowadays the membership is employed in all walks of life, but it has never lost its working class grassroots.

Strong ties exist with our adjacent clubs, at Grangemouth, Carriden and Blackness.